On August 31, 2021, after Talibs took control of Afghanistan, a new wave of refugees moved towards Europe. Some of these refugees were pushed to the Polish border by Belarus but Poland did not want to accept refugees and pushed them back. This caused one of the largest humanitarian crises in Poland in the past years. There were reports of hunger, cold, sickness, and finally deaths among refugees hiding in forests along the Polish border, with slim to no reaction of the Polish government in terms of humanitarian actions. Instead, a state of emergency has been imposed. On November 8, 2021, a large group of refugees tried to get past the Polish border which caused, among others, fear of war, mobilization of the Polish army and police on the border, and multiple media reports saying of, so-called, attack of the refugees on the Polish border.

Apart from the refugee crisis, during autumn the topic of women’s reproductive rights resurfaced after the death of a Polish woman (Izabela from Pszczyna) which was associated with the doctor’s fear of removing the fetus in order to save women’s life due to the law banning abortion even when fetus is terminally ill. This caused a new wave of protests at the beginning of November 2021, but on a much smaller scale than in November 2020 when the law was introduced polarizing Polish society. Also at the beginning of December 2021 Polish government was supposed to vote on the new law proposal that would treat any case of abortion as murder punishable by life sentence.

We had an opportunity to observe how Polish society responded to the aforementioned events thanks to the Collective Narcissism Monitor – a monthly pooling site organized by PrejudiceLab and performed via Arianda Research Panel. We surveyed a representative Polish sample measuring their collective narcissism, ingroup satisfaction, political beliefs, and perception of their economical situation. We report changes in ingroup satisfaction (Leach, et. al., 2008),  satisfaction with national identity concentrating on the positivity towards your national group. Higher scores, on a scale from 0 to 1, mean higher in-group satisfaction. We report changes in collective narcissism (Golec de Zavala et al., 2009), a belief that one’s ingroup, in this study - Poles, is not sufficiently recognized and valued by others. Higher scores, on a scale from 0 to 1, mean higher collective narcissism. Details about the study and measurements can be found on our site, in the CN Monitor tab (here). This study was cross-sectional. Each measurement was independent of the previous one. However, all measurements were representative of Polish society. Nevertheless, all conclusions presented in this blog entry should be read with caution and treated as a discussion about possible consequences of events rather than a scientific report.

In our previous analysis, we saw that adults of 55 y.o. and older are rather stable in their national collective narcissism and national satisfaction levels, no matter what events were taking place during the year (elections, abortion law crisis, etc.). In this report, we focus on between 18 and 54 years old whose opinions changed much more. We divide those adults into two age groups that underwent a different courses of changes: young adults (18-24 y.o.) which are on the edge of adolescence and young adulthood; and adults at age 25-54.

These two groups, although they had a similar level of collective narcissism and ingroup satisfaction before the events stated in the introduction i.e. in August 2021, started to differ more and more with each month. The differences spiked at the end of November. In that month young adults diverged from the others to endorse the lowest levels of national narcissism and display the lowest national satisfaction among all age groups and lower in comparison to August 2021 when the change began. Older, older adults changed in the opposite direction endorsing more national narcissism and national satisfaction and pride (Figures 1 and 2). 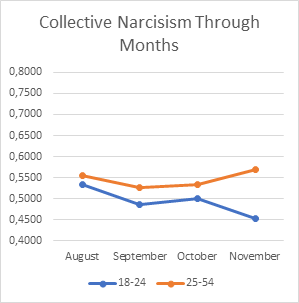 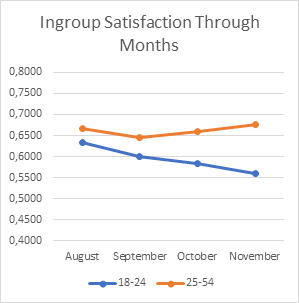 We have performed comparisons of people based on different age criteria. The first one is between adults 18-24 and adults 35-44 y.o. According to European statistics, 25-34 is the age range when most women give birth to their first child. Procreation goals are likely to be more salient in this cohort than in any other. Analysis that focuses only on 18-24 year-olds and 35-44 year-olds show larger differences. Adults 35-44 from October 2021 begin to increase in a substantial way their ingroup satisfaction and collective narcissism (Figures 3 and 4). 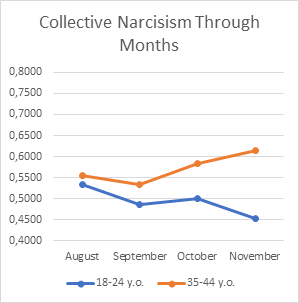 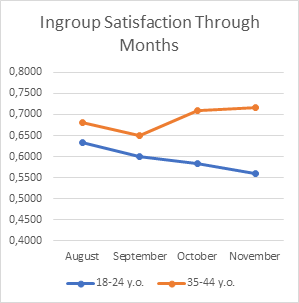 We propose that one of three events (or some interaction of them) caused differences described in the results. The first one is the refugee crisis. Younger adults may be more sensitive to the struggle of refugees and disapprove and distance themselves from the actions of the Polish government. It is also possible that the younger adults are afraid or dissatisfied with the possibility of being drafted to take part in a war that the government was using as a threat. At the same time, older adults might feel a need to be protected within the country and in opposition to the younger adults, they would be less likely to be conscripted. It is also possible that the narration of some of the media, that the refugees pose a danger to Poland, was more accepted by the older adults.

At the same time, it is also possible that the difference, which was largest at the end of November 2021 was caused by the resurfacing of the women’s reproductive rights dispute that greatly polarizes Polish society and alienates its youth. Younger adults seem to be more reactive to this topic (e.g. see also this blog entry) than the older ones. It is also important to note that adults 18-24 are mostly before their procreation and are strongly affected by any changes in this matter. The events that unfolded this fall with the unnecessary death of a pregnant woman might have caused strong fear among the adults that want to have children in the future. This however does not explain why adults 25-34 in the peak of their procreational age do not display this fear.

The final explanation is much more prosaic. In November there were two crucial games for the Polish national team in 2022 FIFA World Cup qualifications. Google trends suggest that the general public paid a lot more attention to these games than to the refugees’ crisis and the abortion laws combined. Young people in Poland do not pay a lot of attention to political issues. In fact, over 90 percent of adults aged 18-30 do not pay attention to political issues. Main news programs are watched by less than 10 percent of a population. Older men pay more attention to the national football team and those games could have been a reason for rises in their in-group satisfaction and national collective narcissism. While the decreases in younger men are harder to explain. As our data show younger people are much more fickle in their views and stances and it is really hard to pin down what causes those changes but data suggests that general public is not intrested in political issues. It seems that general population prefers escapism rather than political issues. Google trends and any other online parameter (views, likes etc.) show that general public is more intrested in basically anything from Young Leosia through Top Model up to Fame MMA (Figure 5).

Frequency of searching phrases in Google from 1st of August to 30th of November. 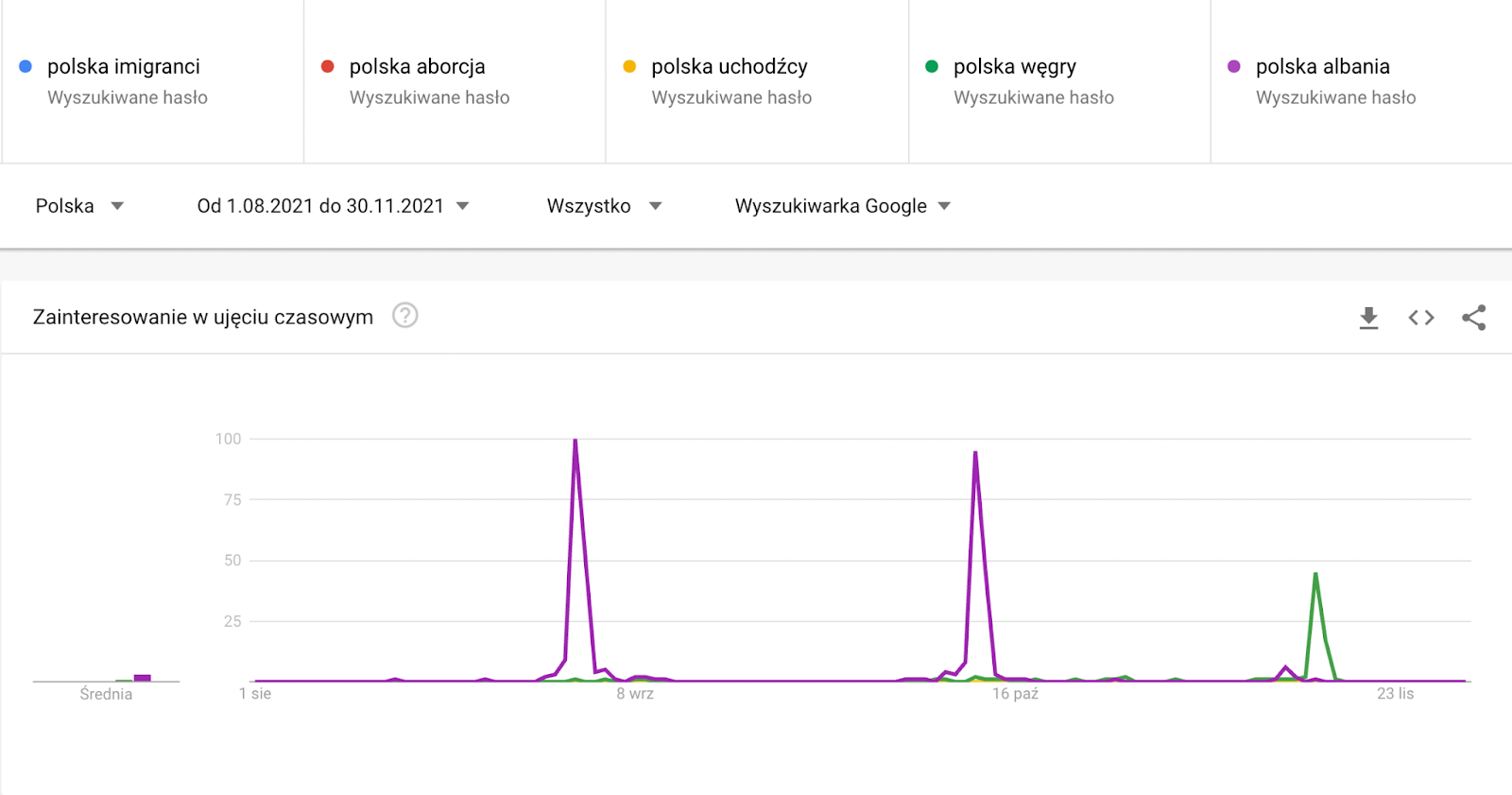 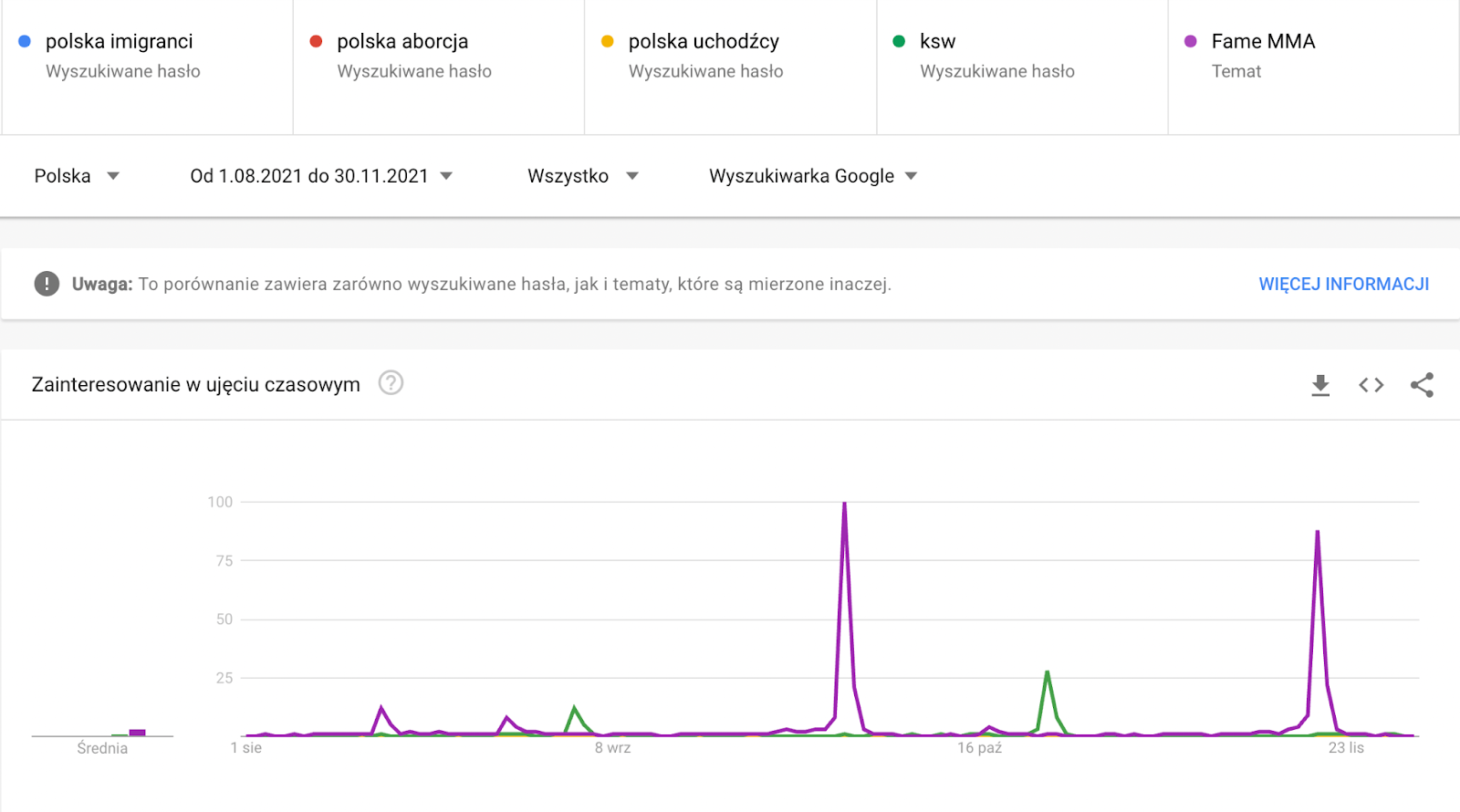 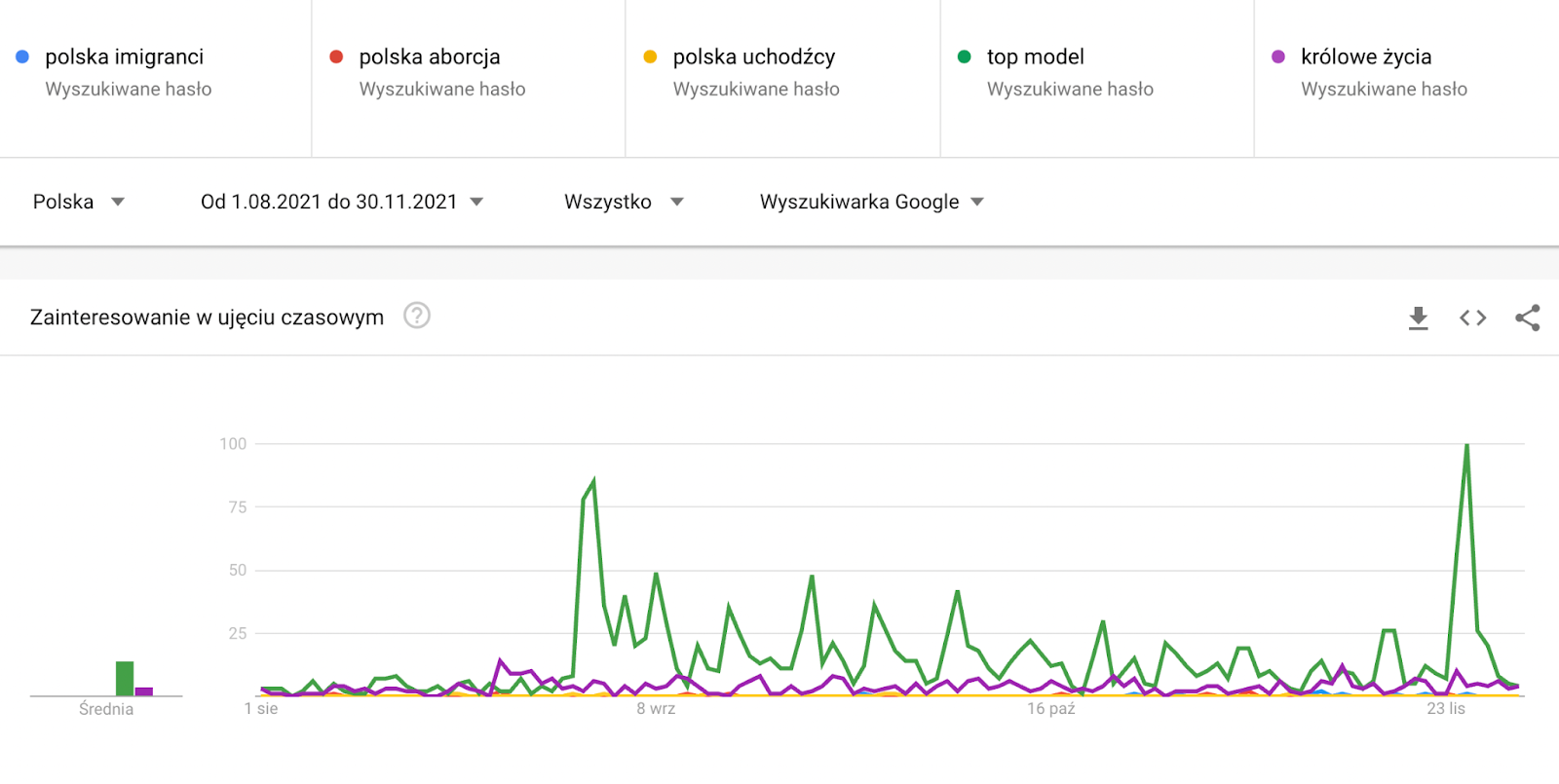 It is interesting to observe how our society changes due to certain events. Although we would require a longitudinal study that would examine the same people before and after major events to postulate any causality, it is still valuable to observe changes that are showing in our analysis. It is an important part of our work, to observe and hypothesize about the events and their effects on people - thanks to that, we can later prepare studies and research that give us more precise answers about how collective narcissism works. 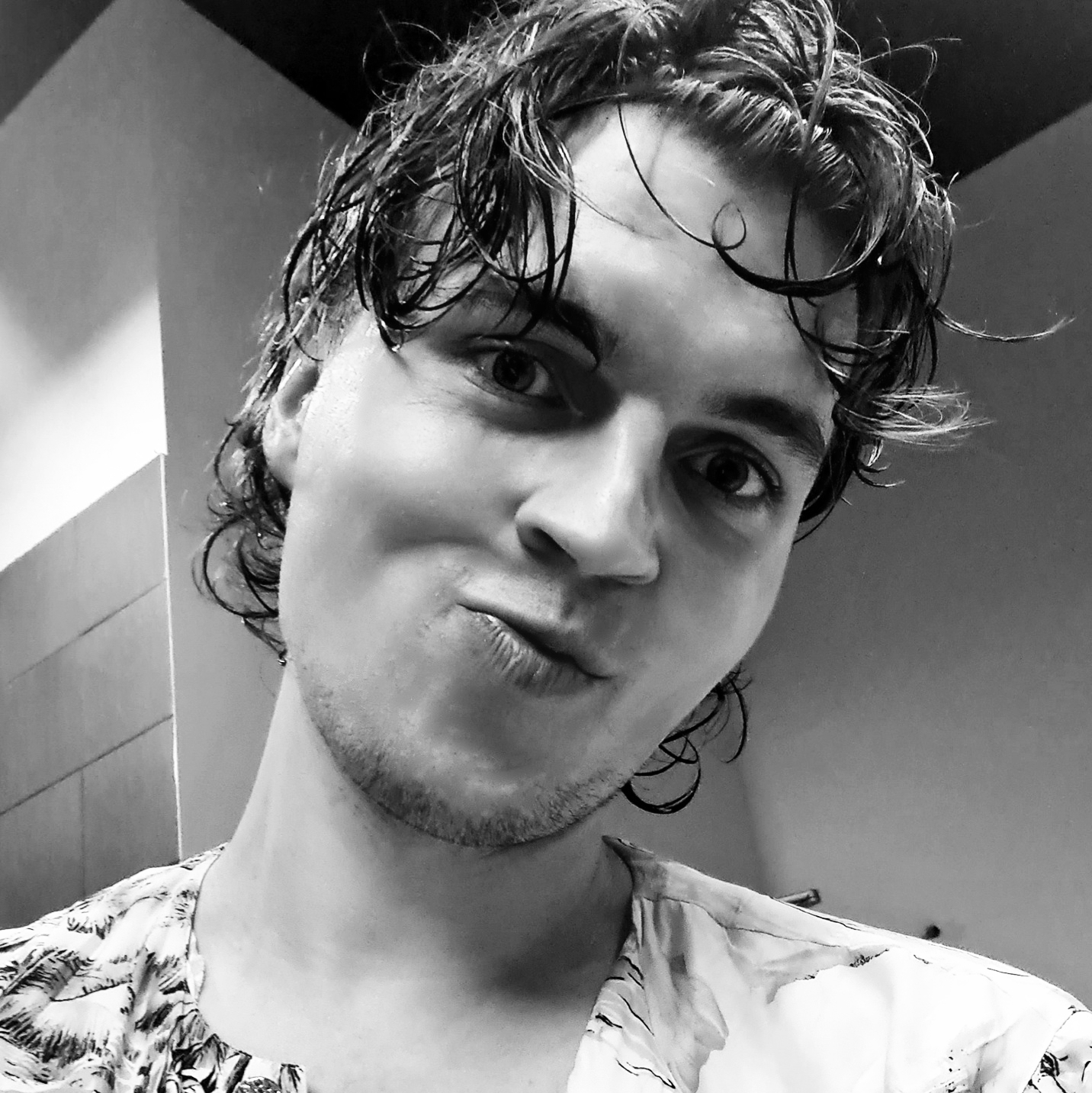 On August 31, 2021, after Talibs took control of Afghanistan, a new wave of refugees moved towards Europe. Some of these refugees were pushed to the P...