COViD-19 pandemic emerged in March 2020 in Poland with 2 (or 3) week full lockdown. No one knew how long it was going to last, however taken from the worldwide news it started to become obvious it is going to affect all societies on many levels, from health to wealth. As Prejudice Lab we decided to monitor the most common political views  (left - right) and changes in collective narcissism in response to pandemic-related events. With time people started getting used to the situation. Despite the difficult situation in the health system, and economical situation of many,  the political scene became very eventful. We are glad to present a brief report that will address some of the findings from fourteen measures, one each month since March 2020. We will be reporting changes in Left-right Self-placement (on a scale from 0 to 1, with scores below 0.5 being leftist, scores around 0.5 being centered orientation and scores above 0.5 being right-wing) and in Collective Narcissism (Golec de Zavala et al., 2009) (a belief, that one’s group, in this study - Poles, is not sufficiently recognised by others. Higher scores (on a scale 0 to 1) mean higher collective narcissism). Details about the study and about measurements can be found on our site, in the CN Monitor tab (here).

During the past fourteen months there were four crucial events that we evaluated as critical for Polish society. First of all, the first full lockdown occured in  April 2020. Second event is the Presidential campaign and elections. It is worth to mention that the Presidential campaign in July 2020 was perceived as aggressive, as it involved many offensive content towards the LGBTQ+ community (LGBT ideology as a threat to traditional family values) and underestimating risks associated with the pandemic (analogically to Donald Trump’s communication). Effect of this event can be seen in the July measurement. Third event was a Constitutional Courts verdict, that an abortion in a situation of a serious or terminal illness of the fetus is to be forbideen. This act sparked massive protests in the entire country (the largest one was in Warsaw and was estimated to have 100 thousands participants) which lasted for over a month. During these protests there were multiple police interventions and episodes of serious police provocations and brutality (including usage of pepper gas against peaceful protesters) with no respect to the COViD restrictions on the police side (article describing these events can be found here) . Measurement made in November was largely influenced by these events. In the end of January Polish government published the Constitutionals Court verdict, making it an applicable law - this sparked a second wave of protest, however on a much smaller scale. Effects of this event can be seen in February measurement.

The largest group of the protesters were young women, which are directly affected by the events we described above. This is also a group representing a generation that became very active socially and politically in the past years. That is why, in this blog entry we will be analysing only women in the age of 18-34.  It is worth mentioning, that men in this age have a more right political orientation and have a higher collective narcissism than women (as can be seen in Figure 1 and 2). Interestingly,  collective narcissism and political orientation in men seems to be stable and unaffected by the major events in Poland in the past year.

In the analysis, we decided to divide this group of women into two age groups: 18-24 and 25-34. The data we gathered showed that women in the group of 18-24 less often have children than the women from the older group (Figure 3). Moreover,  younger women more often attend school or University, while older women more often work (Figure 4 - category “other” stands for the unemployed and for the people on pension). Therefore we have two groups, women 18-24 years old, which are for the most part childless and less occupied, and women 25-34 years old, that are having children and are professionally active. 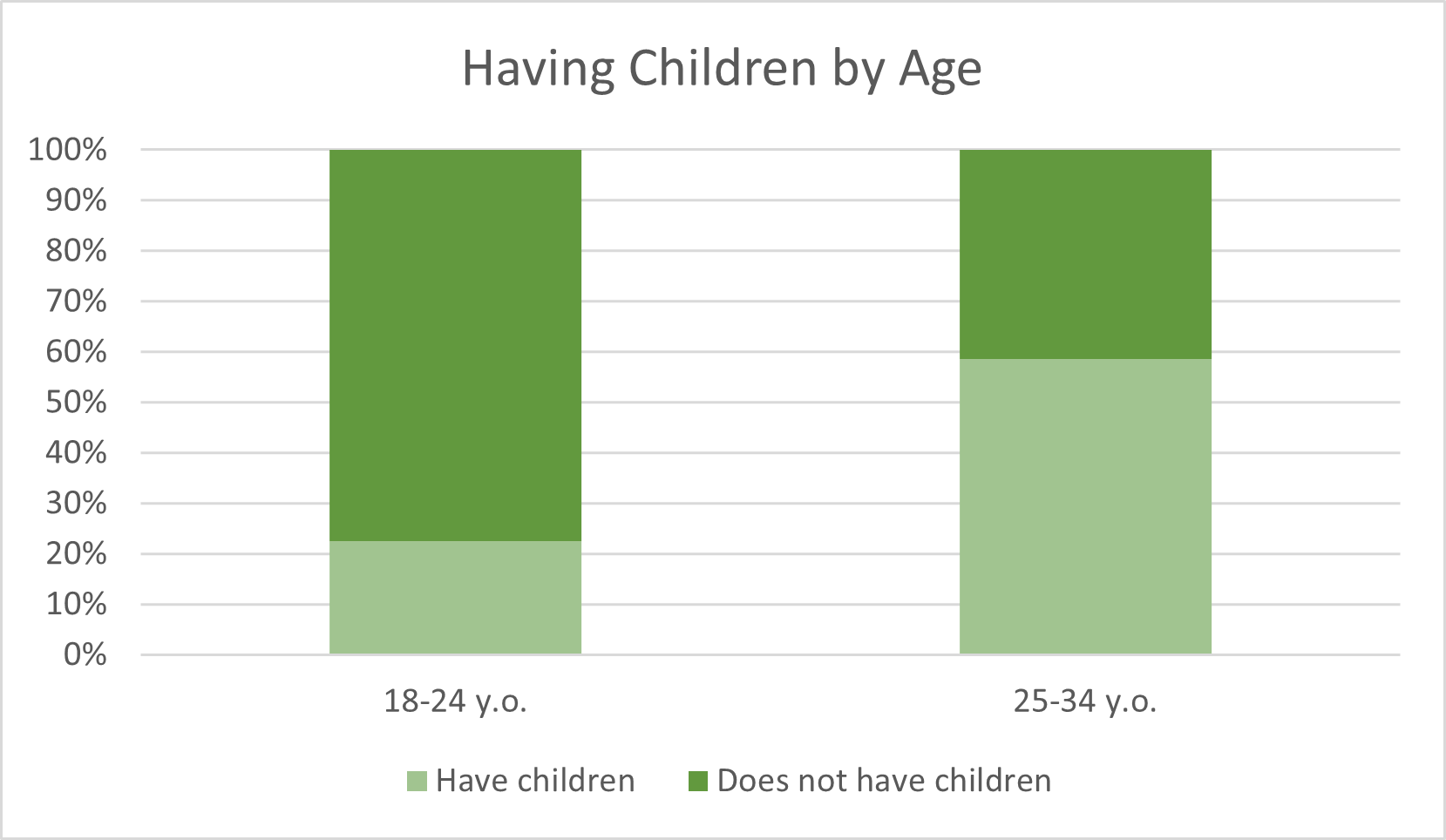 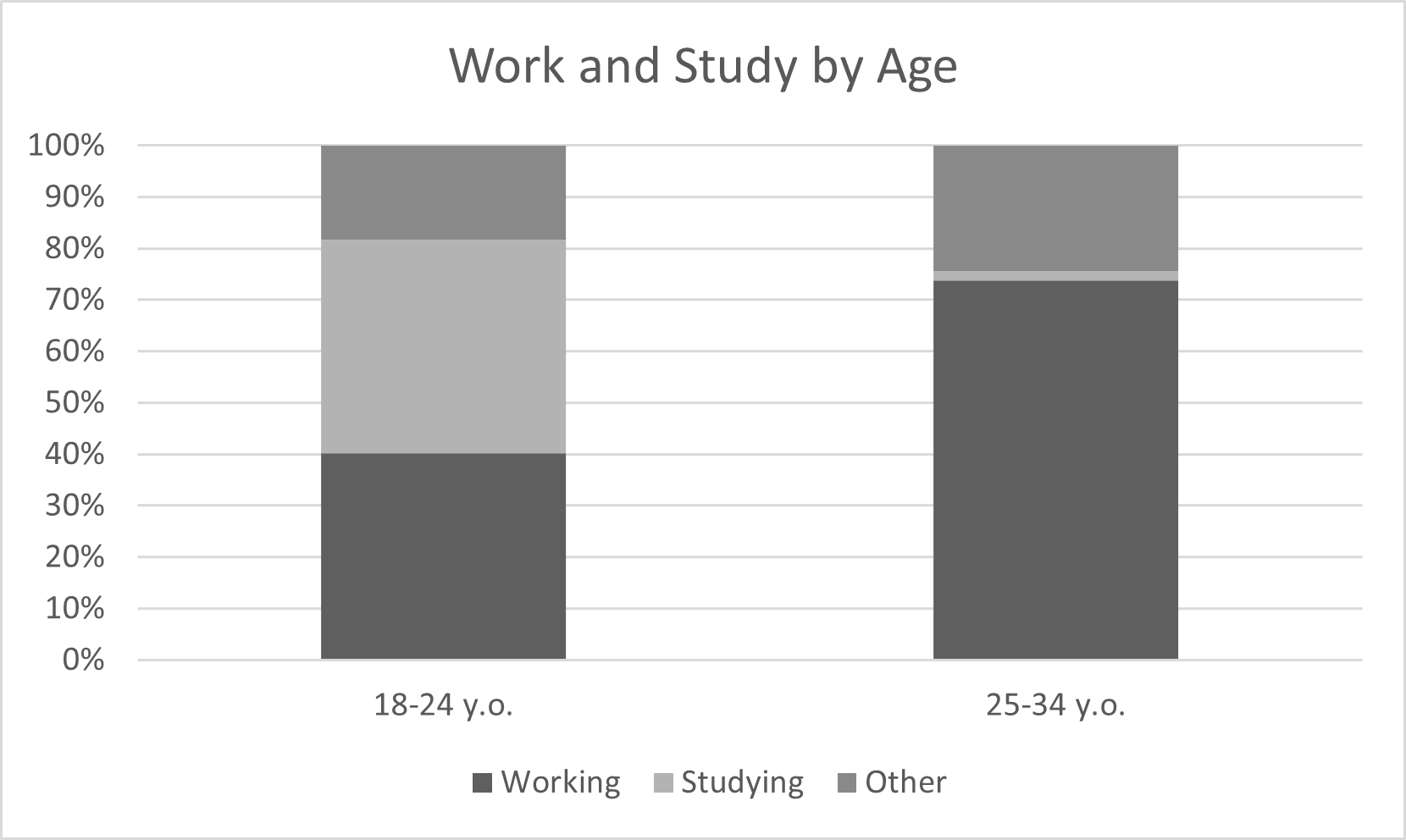 The younger women are more left politically oriented than the older ones. Women's political orientation (Figure 5) was largely affected by the aforementioned events (marked as yellow circles on the charts). When the pandemic started, younger women became more leftist, while older women gravitated toward the right-wing. This relationship can also be seen in July, after the presidential campaign, although the effect was much weaker. The Women Strike in November affected mostly the older women, making them once again more right-wing oriented. However the strongest effect can be observed in February, after the Constitutional Courts verdict publication. Then, the effect from the beginning of the pandemic duplicated, however to a much larger extent, with younger women becoming extremely leftist.

We also analysed whether political beliefs and collective narcissism can differ between places of living. We divided women into two groups - the first group lived in a village or a small town. Second group lived in larger cities (above 20 000 inhabitants). Women that lived in a village were more narcissistic (Figure 7) and more right-wing oriented for the most part (Figure 8). They were also mostly unaffected by the major events described by us. However, they became more leftist during November, that is after the Constitutional Courts verdict. Women from cities became less narcissistic after the first month of pandemic, presidential campaign and after the Constitutional Courts verdict. However women from cities also became more right-wing oriented during these events, especially after the Tribunal's verdict. It is possible that inconvenience associated with living in a city that held many loud protests caused women living in such cities to gravitate towards central political orientation.

Past year was very dynamic for young women, including the effects of the pandemic, political changes and the great wave of nation-wide protests. These events did not go unnoticed in the eyes of young women. It is interesting that older young women and women age 18-24 reacted differently to these events. Older women were reacting by becoming more right wing oriented and displayed greater collective narcissism, while younger women reacted in an opposite direction. It is also interesting, that women from villages and small cities were largely unaffected by these events, while women in the large cities reacted by gravitating towards right-wing.

This study was cross-sectional. Each measurement was independent from the previous one. However all measurements were representative for the Polish society. Nevertheless all conclusions presented in this blog entry should be read with caution.

COViD-19 pandemic emerged in March 2020 in Poland with 2 (or 3) week full lockdown. No one knew how long it was going to last, however taken from the ...