Since rioters stormed the Capitol on January, 6th, 2021, to challenge the certification of Electoral College votes, President Donald Trump has come under increasing criticism for his rhetoric. In particular, Trump’s message since the election—a false allegation that the presidency was unjustly stolen from him in a fraudulent, irregular contest that should be reversed—has been identified as a major factor in leading supporters to endorse his rejection of democratic results. In our earlier work, we identified a major source of support for Trump’s broader grievance-oriented message: collective narcissism, an exaggerated belief in the national in-group’s greatness accompanied by the perception that this greatness is insufficiently acknowledged by others. Collective narcissism has been linked to support for illiberal and undemocratic right-wing populists worldwide. If so, can it tell us anything about who is likely to support Trump’s efforts to challenge and overturn the results of the 2020 election?

How does collective narcissism work?

Collective narcissism is often accompanied by a sense that the in-group is unjustly losing or may soon lose a position it supposedly deserves. Democracies, however, provide a diverse range of groups to seek power and inclusion. Many collective narcissists find this threatening. Populist leaders, like Trump, offer collective narcissists conspiratorial but external and thus ego-protecting explanations of why their groups are losing privilege and power. These leaders offer their followers a community— built around a narrow, nostalgic form of national identity—defined by shared resentment, thereby giving them representation. Consistent with this, collective narcissism strongly predicts support for Trump and other authoritarian-populist leaders who appeal to a sense that the exceptionality of the in-group is unjustly questioned and promise that its unquestionable greatness will be restored.

It is thus likely that collective narcissism and in-group satisfaction will relate in opposite directions to support Trump’s efforts to reject the results of the democratic election. We expected that collective narcissists would be especially likely to see the election result as illegitimate and support Trump’s efforts to reverse the result in an anti-democratic fashion in order to stay in power. In contrast, we expected in-group satisfaction to be associated with refusal to support Trump using anti-democratic methods to stay in power.

How we did our research

To examine this prediction, we surveyed 308 American adults via Amazon’s Mechanical Turk. In addition to measuring basic demographics and party identification, we asked them questions assessing collective narcissism, in-group satisfaction, and support for Trump’s efforts to overturn the election. Following previous research, collective narcissism was examined using a scale consisting of five items about national identity: “If the United States had a major say in the world, the world would be a much better place,” and “Not many people seem to fully understand the importance of the United States.” and “I will never be satisfied until the United States gets the recognition it deserves.” We also included a four-item scale measuring in-group satisfaction, which included items like “I am glad to be American” and “It is pleasant to be American.” Finally, we measured support for overturning the election with a five-item scale, using items such as “I would like President Trump to win the elections even if the Supreme Court had to go against the popular vote” and “I would like President Trump to win the elections even if he had to compromise the rule of law.” We also controlled for gender, race, income, education, age, ideology, and whether the participant identified as Republican. Since resistance to the result of the 2020 election and allegations about its “unfairness” have a specifically racial component, we also included a measure of racial resentment as an additional control.

Since support for Trump’s desire to change the election result has a racial component and has been concentrated among White Americans (as noted above), we also looked at whether the relationship between collective narcissism and support for overturning the election was stronger among the Whites in our sample. We found no evidence that it was, suggesting the collective narcissism is similarly associated with resistance to accepting the 2020 election results among individuals of all racial backgrounds. 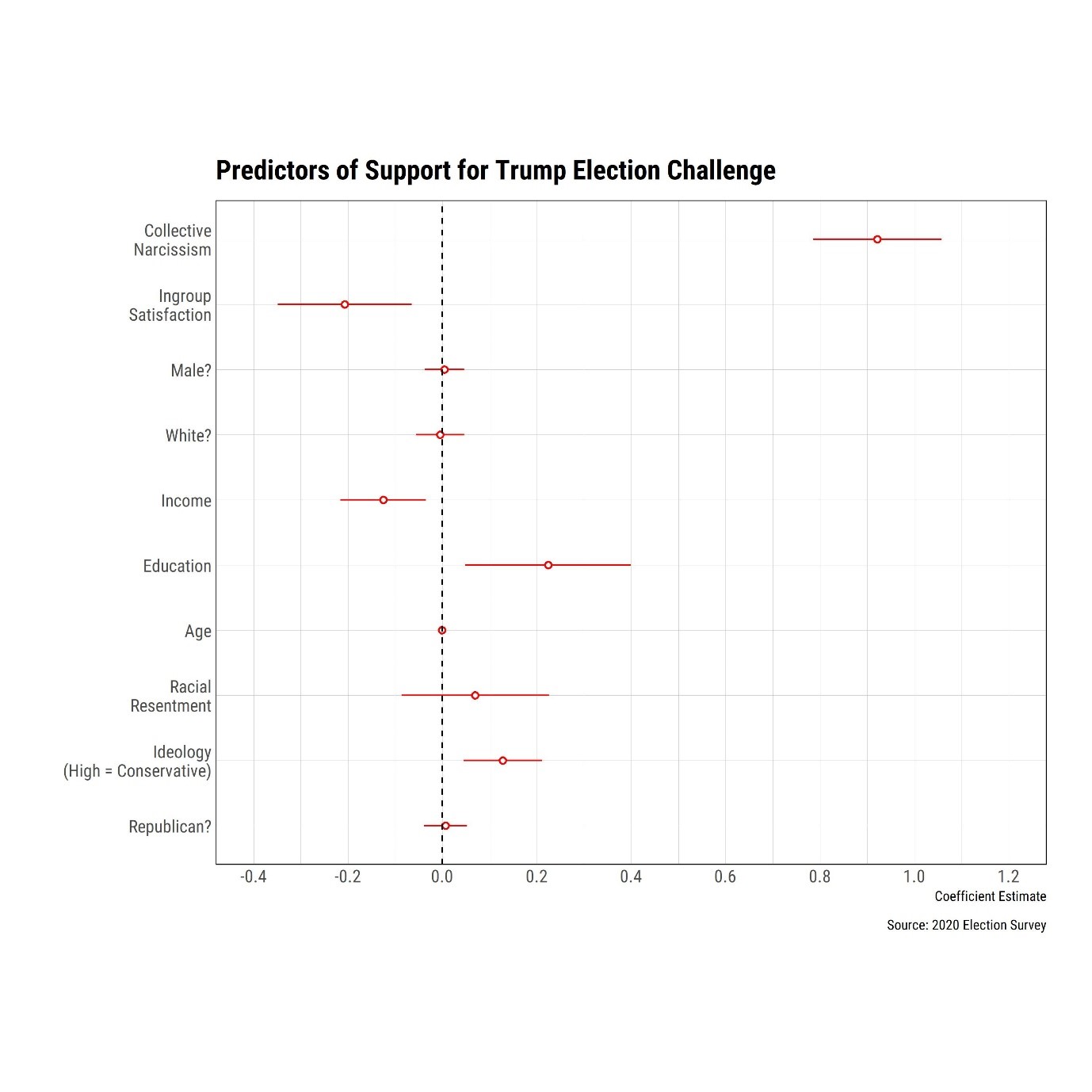 What does this mean?

Our results suggest that collective narcissism can explain why some citizens are willing to support President Trump’s efforts to overturn legitimate electoral results. All other things being equal, those who think that the greatness of their in-group is insufficiently respected were more supportive of keeping Trump in power via undemocratic means. In contrast, once collective narcissism was accounted for, those who merely feel proud of their identity were less supportive of Trump’s antidemocratic efforts. Among other things, we believe that this provides important context for the violent storming of the Capitol earlier this month. As in other nations, collective narcissism is again a strong predictor of authoritarian-populist challenges to liberal democracy.

Of course, our findings are subject to several caveats. For example, our data are observational, so we cannot be sure that collective narcissism “causes” a voter’s preference for Trump’s violations of democratic procedures. Similarly, our sample is relatively small and not representative of the broader American population. In particular, our sample of non-Whites was relatively small, meaning that our conclusion about the lack of racial differences in the implications of collective narcissism should be treated with caution. Nevertheless, they provide some evidence that an exaggerated but brittle sense of in-group love—in the form of collective narcissism—may be an important factor in resistance to accepting democratic outcomes.