This article is available in the PDF format here.

A significant drop took place at the end of March 2020. The incumbent and the main opposition candidate were quite close in the polls as the pandemic broke out in Poland. Indeed, more respondents preferred to vote for one of the opposition candidates than for the current president. However, by the end of March the majority of our respondents (47% in comparison to 31 % who would still vote) decided not to vote (in comparison to the initial 7% of the no-voters in the end of February, 2020, Figure 1). The last wave of measurement (conducted in mid May, 2020) indicated that the current president Andrzej Duda was the most supported candidate (almost 16 %, 11% drop since the end of February) with the independent candidate Szymon Holownia (“Duda Bis”) as the next supported candidate (over 5%, 4% drop since the end of February, with members of the established opposition losing about 6% each and Ms Kidawa-Blonska withdrawn). However, nonvoters still constituted the largest group among the respondents (over 38%) during the last wave of measurement conducted on the date of the planned elections (indeed, these were eventually postponed on May 6 after strong internal and external criticism regarding the fairness and safety of the presidential election during the pandemic; DW, 2020). Who were the almost 40% of our respondents who decided not to vote during the presidential election between the first and the fourth wave of measurement (taken at the end of February and the end of March)? 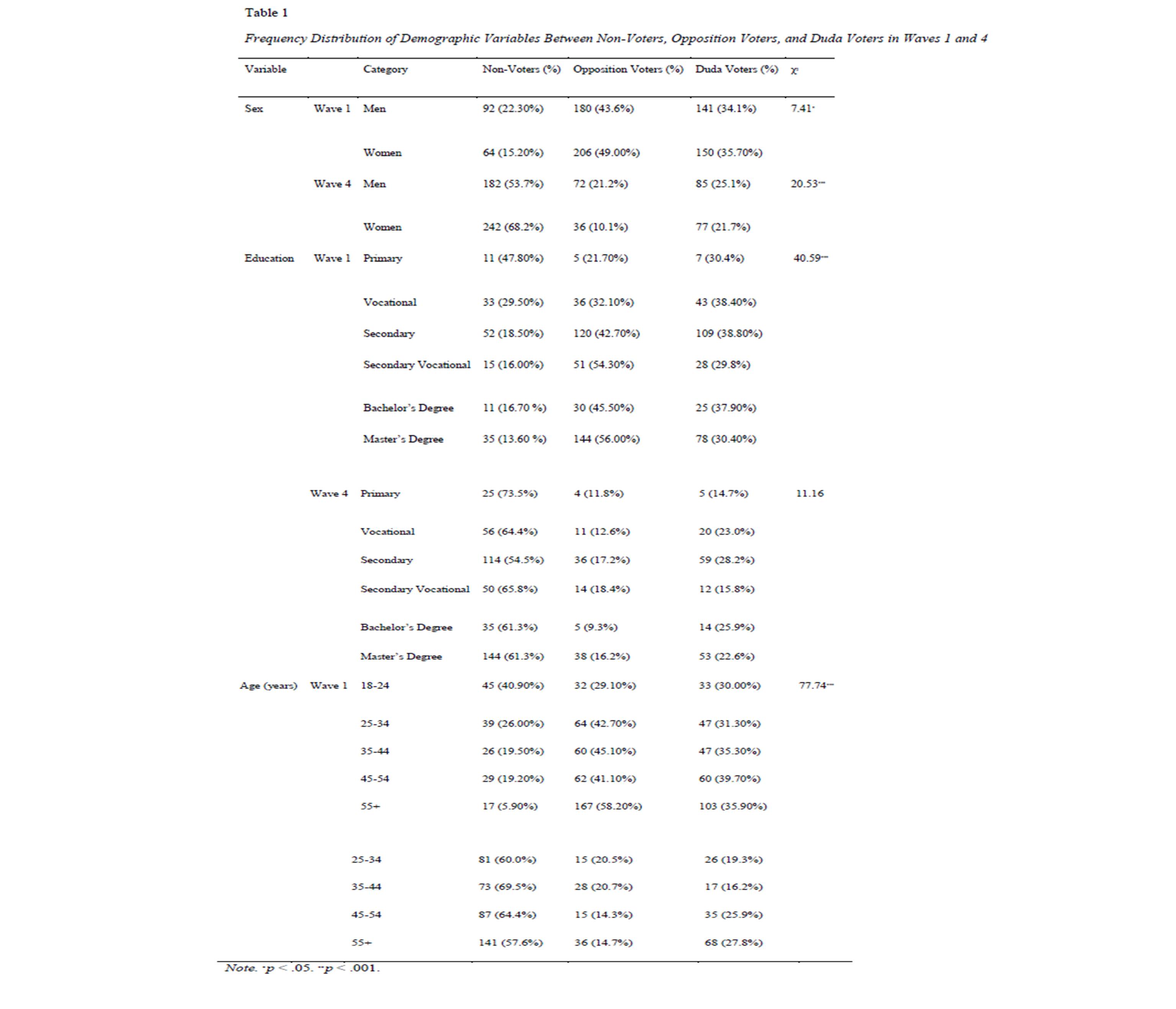 The new non-voters were older and more educated than non-voters in Wave 1. There were more women among them, in contrast to wave 1 when non voters were mostly uneducated men. Thus, middle-aged, well-educated women were the voters who refused to vote in the presidential elections by Wave 4. Figure 1 illustrates that both the incumbent and the opposition candidates lost voters from the end of March to the beginning of May. However, the opposition (especially Koalicja Obywatelska and Lewica) lost more votes (in comparison to actual votes in October, 13th, 2019 elections and declared intentions to vote during Wave 1 measurement) and did not recover support until the (non)election date.

Thus, our data suggest that during the first month of the pandemic the liberal opposition (more than the current president) lost the votes of educated women. Ironically, but perhaps explaining why it lost the largest share of supporters, the main opposition party (Koalicja Obywatelska) abandoned the liberal educated, mature female candidate and replaced her with a younger man after the elections were postponed.

In order to understand the evolution of this new segment of non-voters during the pandemic, we compared the changes in social attitudes in this group to the changes undergone by supporters of the current president and supporters of the opposition (Figure 2). Perhaps not surprisingly considering the change in the demographic composition of the new non-voters, sexism (both hostile and paternalistic attitude towards women) dropped in this group significantly, while it did not change among the voters. Sexism was higher among Duda supporters than among the Opposition supporters and the non-voters (Table 2).

Non-voters (and supporters of the democratic opposition) lost national satisfaction (feeling satisfied and proud to be Polish) and national narcissism (a belief that Poland is exceptional but not sufficiently admired by others). This is in contrast to voters whose level of national narcissism remained constant during the pandemic, especially amongst Duda supporters where it remained the highest (and higher than among the supporters of the other, less conservative candidates). A sense of national efficacy and cohesion initially increased among the non-voters and then dropped significantly after wave 3. In contrast, the sense of national cohesion increased by wave 3 and stayed high and stable for the next six weeks among Duda supporters. Finally, authoritarianism - a tendency to follow leaders who rule by force and punish dissenters - dropped among non-voters but did not change among the voters.

Figure 2 shows that the profile of social attitudes of the new non-voters is similar to the profile of attitudes held by voters of the liberal opposition, but different from the profile of attitudes held by supporters of the current Duda presidency representing ultra-conservative, right-wing, illiberal populism. This suggests that those new non-voters are likely to be former opposition voters who underwent a change towards more liberal attitudes that alienated them from their representatives. The most significant decrease in the number of potential voters occurred between wave 2 and 3. This decrease deepened between wave 3 and 4 (see Table 3 to compare the timing of the measurements and the main events of the pandemic). A significant proportion of people became unwilling to follow undemocratic leaders, lost their national pride and narcissistic belief that their national group is exceptional. They lost the sense of being meaningfully related to their co-nationals. They are like the opposition voters but their attitudes became more egalitarian, less prejudiced, less authoritarian and more autonomous as the pandemic unfolded. They rejected the national narcissism favoured by the governing politicians. They were mostly educated women. The question remains why those voters were not mobilized by Lewica, the only liberal political party in the Polish political scene nowadays.