Social psychologists recognize the need for accurate procedural routines when using physiological measurements, in order to obtain reliable outcomes. As such, this paper is interested in the Cyberball task, widely used when researching social exclusion or rejection. In particular, we reviewed articles on this subject, focusing on pupillometry, galvanic skin response and heart rate variability, to determine accurate procedures for Cyberball use.

We found two studies addressing pupillometry, galvanic skin response and heart rate variability after using the Cyberball task. The first study (Balboa, 2017) compared differences in pupil size using either human photographs or abstract images as an avatar for cyberball games. All images used in the procedure were matched in luminance. Participants were divided into two conditions: human players and computer players. Each randomized condition was composed of 4 cyberball games - two inclusion and two exclusion settings. Each game lasted for 12 tosses. During inclusion, the participant receives 4 of 12 tosses, whereas in exclusion they got just 2 of 12 tosses. Before each game, a picture of two upcoming players was shown to participants. In the human players condition, participants played with male and female players, while in the computer players condition they played with 4 abstract images. The background was grey. Figure 1 illustrates the procedure.

The second study (Sleegers, 2017) investigated pupillary reaction during games of Cyberball, for all social inclusion and exclusion events (a single ball is thrown), regardless of inclusion/exclusion condition. Each participant first played the inclusion game, then the exclusion game. A single game lasted for 90 tosses (about 3 min). In the inclusion condition, each player had had an opportunity to throw a ball 30 times. However, in the exclusion condition participants got only 6 tosses. The time before tossing was set for 500ms, the flight of the ball lasted for 900ms and the time to “think” varied between 900-4300ms. The game background was white, but contained a special frame. Computer players were named. Figure 2 illustrates the procedure. 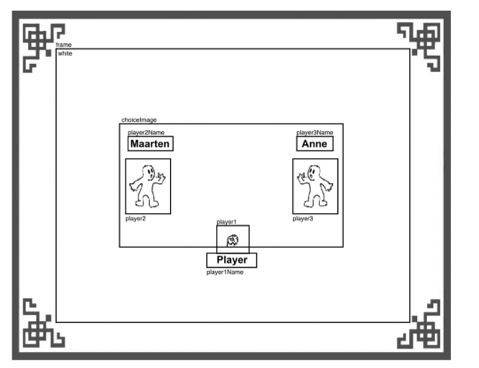 We found two studies investigating the cyberball paradigm and ECG measurement. The first study, (Kawamoto, 2013), investigated temporal changes in the cognitive, affective, and motivational processes, as a result of being ostracized by a computer. They changed cyberball players into plain squares on the gray background. Each participant played 3 cyberball games. First, as an observer, then as a player in the inclusion condition, and afterward as a player in the exclusion condition. A single game lasted for 45 tosses (about 150 seconds). The time before tossing was set for 1500ms, the flight of the ball lasted for 100ms and the time to “think” had been varied between 1000-2000ms. Figure 3 illustrates the procedure. 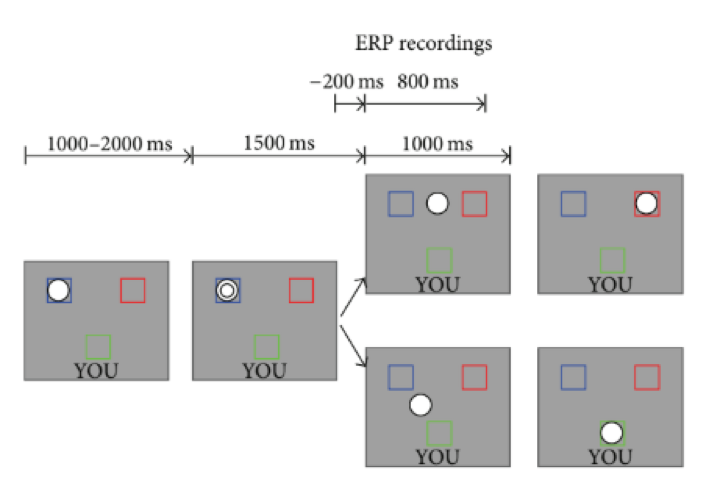 The second study (Kroll, 2019) investigated differences in physiological stress response to social rejection in opioid users vs nonusers. All participants played one cyberball game composed of 50 seconds including part and 110 seconds excluding part afterward. Each participant initially received 6 of 60 tosses, and was excluded for the remaining time. HRV was then calculated for both the inclusion (50sec) and exclusion (110 sec) part of the game. Any other cyberball settings were defaulted or not mentioned in the article.

We have found 4 articles regarding galvanic skin reaction and the cyberball paradigm.

Kroll (2019) also (see mention of this study above) measured the skin conductance level. All cyberball settings were as described in the previous paragraph.

Kouchaki (2015) ran two studies to investigate the ethical consequences of physiological responses to social exclusion. His team divided participants into exclusion or inclusion conditions using the cyberball paradigm. Participants were first instructed to relax for 1 minute, to obtain baseline arousal before the game began. Both cyberball conditions lasted for 5 minutes. In the excluding game they received only 10 tosses, and then were excluded from the game. However, in the inclusion game, all tosses were equally distributed throughout the players.

Kelly (2012, 2017) explored physiological arousal and ostracism among students and adults with traumatic brain injury. All participants played one inclusion and one exclusion cyberball game, in random order. They were instructed to relax for the first two minutes before playing cyberball, for a baseline reading. Each condition last for 29 tosses. During the exclusion game, all tosses were evenly distributed. During the inclusion game, participants received just four balls at the beginning of the game and were ignored thereafter.